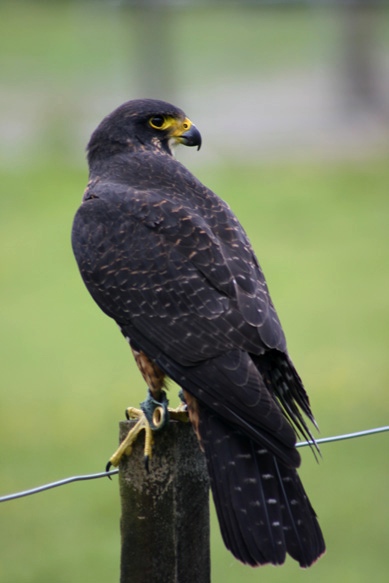 Conservation manager Raewyn Empson said staff believed there was just one pair of native falcons at the sanctuary, but they were believed to be responsible for attacks on two kakariki.

New Zealand falcons are rarer than kiwi, and can catch prey while flying – sometimes at speeds of up to 230kmh.

“They are our top predator so they will take various items of prey, primarily birds.”

Falcon pairs were absent from Wellington for decades, but their return has come at a cost. Two years ago four falcon chicks fledged at Zealandia, while last year one did.

Falcons found their way to the predator-proof sanctuary in 2009, when their successful breeding attempt made them the first pair to breed in Wellington since the 1970s.

However, juveniles are thought to stray far from their parents and were not thought to be responsible for bird deaths at the sanctuary.

Last year, a bellbird was killed at the sanctuary, and now two red crowned kakariki are thought to have suffered the same fate. “One got caught and taken away, we don’t know what happened. The other one, just a pile of feathers were found. Unfortunately no legs.”

The kakariki were likely to have been young birds, and others watching the events would have learnt valuable lessons, Ms Empson said.

“All it takes is a couple of instances and the rest think, ‘Oh, better watch out for that one’.”

Saved from the brink of extinction in Wellington, kaka could face a new threat from humans, with one city dweller threatening to kill them.

Zealandia conservation manager Raewyn Empson said a small number of people living near the Karori sanctuary had called with complaints about the rare parrots eating plums from their trees. One had called threatening to kill the endangered bird, which Ms Empson said was “very unwise”, given that they were strictly protected.

However, most who called to report kaka sightings were thrilled to see them. Ms Empson said Wellington was the only city with a breeding population. “All indications are that the kaka are here to stay.”

The birds tended to gather at dawn and squawk noisily, but Ms Empson said their song had not generated complaints – a far cry from 2008, when the sanctuary said people were ringing to complain about noisy tui, after an explosion in their numbers.