After travelling by boat, plane, van and helicopter, nearly 50 white-faced storm petrels have arrived on Mana Island from Rangatira Island.

The journey from the Chatham Islands to the predator-free Mana Island off the coast of Porirua is a distance of nearly 800km.

Department of Conservation principal science advisor Graeme Taylor said it’s the first attempt in New Zealand to transfer storm petrels from island to island, and most likely in the world.

“We’re very supportive of this project, it’s part of the restoration of Mana Island, getting sea birds back here breeding,” he said.

Mr Taylor said it’s believed the white-faced storm petrel Cook Strait colony was based on Mana Island, before people first inhabited the island more than a thousand years ago. 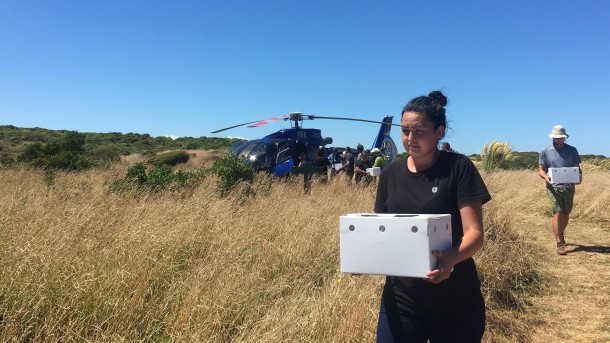 FOMI President John McKoy said the mission is the pilot attempt for future translocations of the species, with an aim to relocate 250 chicks from Rangatira Island over the next three years.

“It’s all about our cunning plan to get the island back to something like the original Cook Strait ecosystems,” he said.

“The more sea birds we have on the island the better over time because they bring nutrients on to the land.”

Seabirds already on the island unintentionally create homes for tuatara and insects when they make burrows.

When they breed on land, nutrients from the food they eat at sea boosts the soil and survival of other animals when they poo, regurgitate food, and through egg shells.

Bringing the chicks to Mana Island has taken several years of discussions with Hokotehi Moriori and Ngati Mutunga [Chatham Islands], Ngati Toa [Mana Island] and Department of Conservation, as well as sorting out the logistics of the transfer.

Biologist Cathy Mitchell hand-selected the chicks from Rangatira Island based on their age and weight, the ideal size being 45 grams.

The six- to seven-week-old chicks will be fed sardine smoothies and given a check-up on the island by rostered FOMI volunteers for up to 15 days.

When the birds are thought to be big enough to emerge in around a week, the gates on their man-made burrows will be opened, giving them the choice to leave the island, for life at sea for several years, when they are ready.

“We estimate that about 60 per cent of the birds that fledge from Mana Island will survive their first year at sea,” DOC principal science advisor Graeme Taylor said.

Mr Taylor said based on the translocation of other sea birds to Mana Island, it’s estimated 10 to 40 per cent of the total 250 birds will return to breed.

Others will return to Rangatira Island, or another predator-free island, he said.

At least 10, but ideally 20, breeding pairs are needed for the aim of establishing a breeding colony on Mana Island to be successful.

New Zealand robin populations have been found to lose their fear of rats after only one generation in a predator-free environment, raising questions about the reintroduction of birds from island sanctuaries to the mainland.

Researchers Ian Jamieson and Karin Ludwig from Otago University compared robins on Stewart Island, where Norway rats are common, with birds on Ulva Island, where rats were eradicated in 1996.

The birds on Ulva are descendants of birds from the Stewart Island population, and Ulva does have native predators – the flightless weka and a native owl.

A report on the research, published in Animal Behaviour, said the Stewart Island robins were more agitated than the Ulva birds in the presence of a rat model, and were more hesitant about approaching mealworm food, which they tended to collect one at a time.

Many of the robins on Ulva appeared to show little fear or recognition of the model rat and were much less agitated and more likely to consume all five mealworms in a shorter time, despite the nearby model rat.

Vigilance and antipredator behaviour were costly for the birds, as they needed to be traded off against other activities, such as feeding or resting, the report said.

New Zealand robins appeared to possess proper antipredator behaviours, such as mobbing and alarm calling, but needed to learn to recognise a mammalian predator as a specific threat.

If experience were important to develop predator recognition, then isolation for just one generation would have a significant effect on the performance of a population. That seemed to be the case for Stewart Island robins reintroduced to rat-free Ulva, the report said.

“These results raise the question of whether established populations on island sanctuaries are appropriate sources for harvesting for reintroductions back to the mainland.”

While predator-naïve birds might be more likely to forage in the presence of a potential threat, as long as some individuals survived an initial attack that incident might be enough to restore predator recognition capabilities.

Press Release – Department of Conservation
A Hector’s dolphin – the world’s smallest and rarest marine dolphin – was spotted in Wellington harbour yesterday after last being seen in 2009.

The dolphin was sighted at Mahanga Bay yesterday afternoon by a member of the public, who reported the sighting to DOC today. They said that the dolphin had “spent about five minutes zooming under and around the boat (with the engine in neutral) before disappearing”. A spectator on shore reported seeing two dolphins, but only one animal was seen from the boat.

The first wild kakī/black stilt chick has emerged from its shell and raises hope after a disappointing start to the 2011 breeding season.

“With the hatching of this wild chick it is now starting to feel like the breeding season is underway. It has been a very late start. The first wild eggs would normally be hatching in October,” explained Liz Brown, DOC Aviculturist.

“We are also down on the number of eggs we are incubating this year at our Captive Breeding Centre in Twizel. We have 30 eggs currently incubating compared with a consistent tally of around 60 eggs over previous seasons,” states Liz.

“The captive birds have been laying later than normal both in Twizel and at Isaacs Wildlife Trust in Christchurch.”

A decline in nesting behaviour seems to be a general trend amongst all braided river birds this year. The region experienced snow in mid October which caused desertion of some nests. This was then followed by floods shortly after which delays re-nesting.

“From early September until late January those out enjoying braided rivers are asked to be considerate of our fragile nesting birds,” says Liz.

“They nest on the ground and can be very hard to see, especially from a 4WD vehicle. It is better for the birds welfare if you walk to your favourite angling spot rather than drive.”

“Birds that are swooping, circling or calling loudly probably have nests nearby. Move away so that they can return to their nests and look after their chicks.”

The wild egg was collected by Department of Conservation rangers from a pair of adult kakī nesting on braided river gravels. It has taken 25 days to hatch. More eggs collected from the wild are expected to hatch within a few days.

Kakī/Black Stilts are one of the rarest waders in the world. Threat classification is nationally critical.

Kakī were once common throughout New Zealand, now mostly found in Mackenzie/Waitaki basins

Other riverbed birds migrate in winter, kakī will stay in the braided rivers of Canterbury/North Otago high country and forage for food

Main threat to the population is predation by feral cats, stoats, weasels and ferrets. Hedgehogs will eat eggs.

Preliminary autopsy results from five dead kea dumped near Arthur’s Pass have confirmed that the birds were shot.

The initial pathology report from Massey University said evidence pointed to the use of an air-rifle and a shotgun to kill the five kea.

DOC Field Centre Supervisor, Chris Stewart, said, “We are appalled by this sort of behaviour and we have referred the matter to the NZ Police.”

“Kea are endangered and their wild population could be as low as 1000 birds,” said Stewart.

The full report will not be available until later this week but the initial results will assist the Police and DOC with their ongoing enquiries.

Under the Wildlife Act, it is a criminal offence to kill kea. Offenders could face a $100,000 fine or six months in prison.

The birds were found piled up on a picnic table at Klondyke Corner in Arthur’s Pass on Monday morning last week. Anyone who was in the area around Klondyke Corner over the weekend of 6-7 August are asked to ring the NZ Police, the 0800 DOCHOTline – 0800 36 24 68 or the Arthur’s Pass Field Centre.

The incident occurred in the same week that a dead kea was dumped on the driveway of a DOC staff member on the West Coast. Early indications are that this bird was also shot and this case has been referred to the Police.